Wholesome Baby Foods From Your Kitchen. 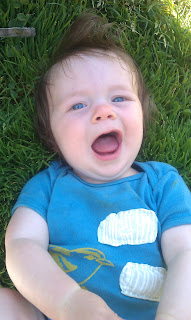 This is our newest addition. His name is Lukas or "Lu" for short. He's six-months-old and the smiliest little thing you'll ever meet. I wish I could say it was always like this, but we had a rough start when he developed a little thing called colic. After a few dozen tears (on my part) we got through it with flying colors and his charming personality shined through.

It's funny how quickly you move on from those tough times with a newborn. It's like it never happened and now the fun begins. He is a breast fed baby - which I'm happy to say has not only gave him a nice nutritional start, but also saved us A LOT of money. Recently, we started introducing solids after a recent trip to Idaho visiting my sister. We are a bossy bunch and she demanded to be around for some of his 'firsts' which included starting him on solid foods. (And this she says after being there when he was born; I would say that was some first!) So we steamed some of his 'first' carrots - added some unsalted butter - and watched him go to town. It was like he had been eating this stuff his whole life. (Yes, all six-months of it!)

I don't like to rush my kid's little lives, but I have to admit I was anticipating this stage because, with my first son, I loved preparing his food and being very specific about what he ate. It was always a family joke about my obsessive ways and the many kidney beans I gave him to snack on. "Kidney beans?" My brother would ask, convinced I was ridiculous. I was a little, but it gave me complete satisfaction to methodically prepare his food and I was really looking forward to doing it again.

The best thing about making your own baby food - besides saving you tons of money - is the fact you know exactly what you're giving them. I like choosing fresh foods and, although I don't always buy organic for my family, I do for my baby. Somewhere down the road later, much later, they'll want their candy fix and some french fries - but right now it's a time for wholesome baby foods.

Homemade baby food recipes are so ridiculously easy. It's a cinch to make enough food ahead of time to store in the refrigerator. I don't spend the time freezing mine for future use, because I make small enough batches. (I think I just like the whole process of preparing the food - so I don't mind making new batches twice weekly.) If this isn't your style, and you would rather make several weeks worth in advance, I'd definitely recommend freezing your homemade baby food.

Now the fun part: exploring homemade baby food. It's a fun process and the opportunities are endless. These could be the easiest and quickest recipes I write, so lets get started. Here are some tried and true wholesome recipes you'll have success with. These are "firsts" for baby when introducing them to solids; down the road you can add some fun stuff like wild salmon, organic chicken and legumes.

Note: you can add rice cereal to any recipe with baby's preferred milk. You can also have fun combining the recipes below for a variation like peas/carrots, avocado/carrot, apples/pears, etc..)

(Adding butter to the carrots actually adds nutritional value because it allows the beta-carotene in the carrot to be absorbed.)

Peel carrots and place in a steamer over boiling water; steam until soft and place in food processor or blender. Add a dollop of unsalted butter and blend until soft; add carrot water to thin puree.

(varieties are just as nutritious as fresh.)

Place peas in a steamer over boiling water; steam until soft, add some reserved water or baby's preferred milk and blend each until smooth.

Peel and cut in cubes and place in a steamer over boiling water; steam until soft, add some reserved water or baby's preferred milk and blend each until smooth.

(Note: broccoli loses half of its vitamin C content when boiled; it pays to steam it.)

Place in steamer over boiling water; steam until soft, add some reserved water or baby's preferred milk and blend each until smooth.

(No need to make in advance, these are dandy no-cook, nutritional options.)

Half, ripe banana (or avocado or papaya)

(The best part of making this highly nutritional seed is you can add any above fruit or veggie to add additional flavor.)

Cook as directed on package. Blend in food processor until smooth. (Now would be the time to add banana, steamed apples, carrots, etc...)

The Herbal Handbook For Home & Health

How to Make Rose Water

Get the latest on Healthy Living and Natural Beauty!

Redefine beauty and embrace holistic living with Mother Earth Living by your side. Each issue  provides you with easy, hands-on ways to connect your life with the natural world -- from eating seasonally to culinary and medicinal uses of herbs; from aromatherapy and DIY cosmetics to yoga and beyond. Start your journey to holistic living today and you’ll discover all the best and latest information you want on choosing natural remedies and practicing preventive medicine; cooking with a nutritious and whole-food focus; creating a nontoxic home; and gardening for food, wellness and enjoyment. Subscribe to Mother Earth Living today to get inspired on the art of living wisely and living well.

Save Money & a Few Trees!

Pay now with a credit card and take advantage of our earth-friendly automatic renewal savings plan. You’ll save an additional $5 and get six issues of Mother Earth Living for just $19.95! (Offer valid only in the U.S.)

×
Hi, thanks for stopping by.  Like to read more content, Join the Mother Earth Living Community Today!
This text can be changed
Join Today!

This text can be changed

This text can be changed
×

This text can be changed
Register Today!
×
click me